Are you interested in meeting the artist behind the painting?
Would you like to get a canvas with a special sketch on the back? Ask your favorite art consulatant about our event specials!
Check out Mark Keathley's "The Patriot," a special release available for a limited time (until April 30th) released just for the Master's Editions events! 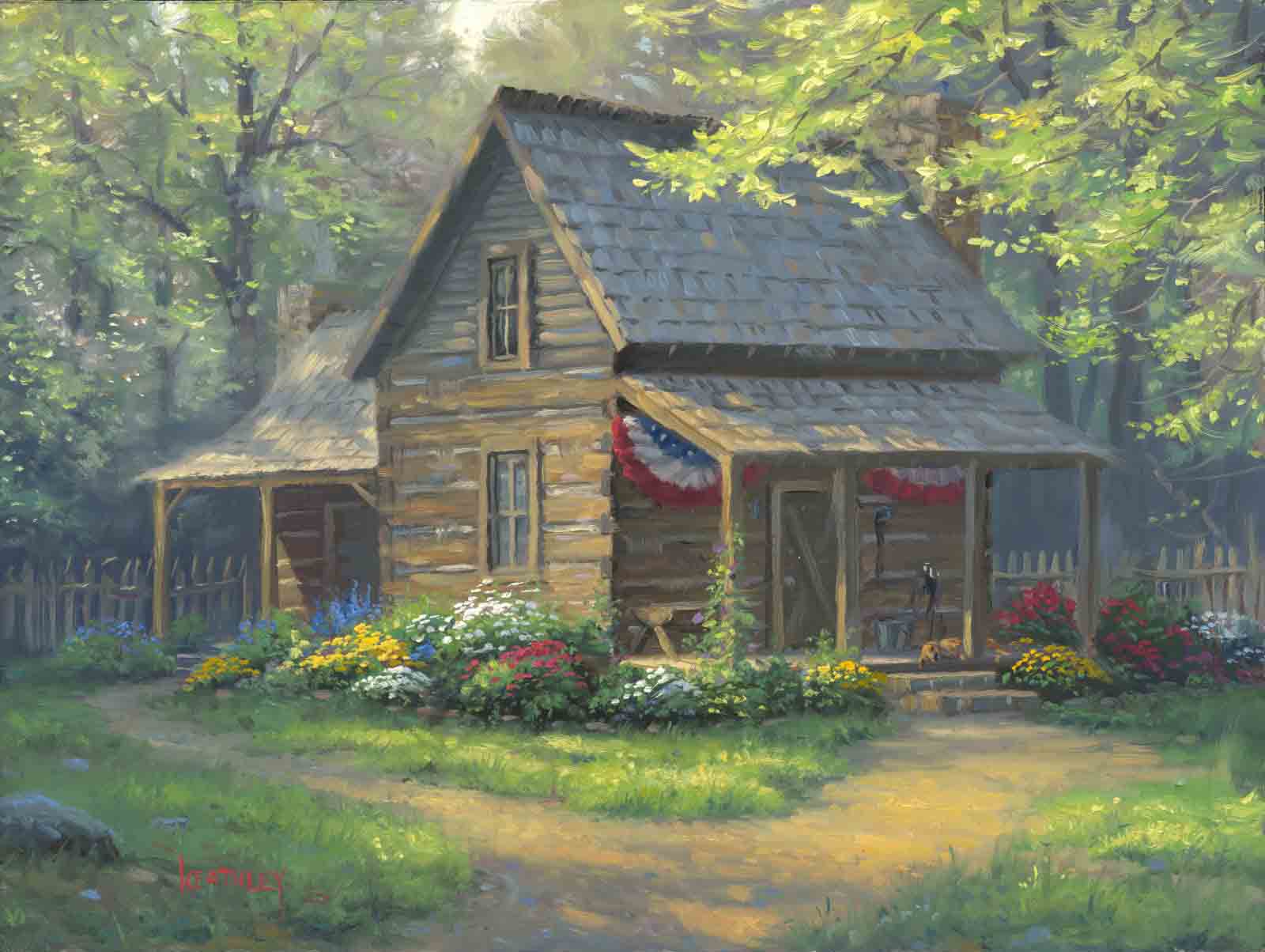 We see a lot of people here at the gallery, and many of them complain of lack of space in their homes. That's no reason not to have something you love! I suggest thinking of your home like a museum. Museums have hundreds to thousands of paintings and artifacts (depending on the size and prestige of the museum, of course). To be able to show a good selection of their artwork, they rotate it constantly. Most people are not going to have the resources of a museum, but we can still follow their example...

You could change paintings each season so that your painting matches the season. Or, you could change paintings each month--following the seasons as well, or just putting up whatever you feel like looking at that month. You could even change them out weekly if you like. Whichever path you choose, this will allow you to make your home feel fresh and new each time you swap them out. In time, even a favorite image can become boring from constant exposure. So... purchase that painting you are so in love with! Give your walls a change. It doesn't mean you have to get rid of what's already hanging there--it just means you get to change your space when you feel like you need a change of scenery.

An easy, often affordable way to update a space is to add some fresh new art prints to the wall. You can even lean framed prints against the wall if you position them properly on a mantle or credenza. Art can do a lot to breath in fresh air to a space because often the introduction of pattern and color can make a noticeable difference. Additionally, art can also add personality and capture a certain mood that may make the room feel a bit more interesting which is why it is important to select work that resonates with you. Have you given this much thought? ... Bring things into your home that you connect to personally and to really start to think about this as you are out shopping and collecting art for your home. It's not about purchasing things that others like, or that are trendy or popular, or that simply "match" but give careful thought to how the things that you display in your home make you feel. How they impact your mood is critical to having a home that you really love!  (How Does Your Art Make You Feel? by Holly Becker) 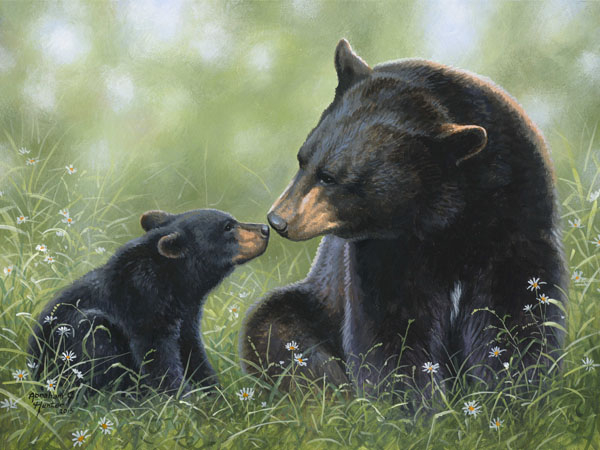 Painting of the Week - Bedtime Stories

Have you been introduced to Mark Keathley's work before? If not, then you have been missing out.

Many people compare him to Thomas Kinkade because of his use of light, but, in my humble opinion, he far outshines Kinkade. Kinkade uses light liberally throughout his paintings which gives them an illuminated two-dimensional feel. Mark Keathley, however, uses one main light source which gives his paintings more drama and creates a sense of depth in them. Mark also uses more realistic imagery instead of the fantasy scenes you get with Kinkade. Obviously, they are both great artists, and they each fill their own niche. A lot of our visitors ask if Keathley ever studied under Kinkade. As far as I am aware, the answer is no. Mark is self-taught and has a style that is very much his own.

Today's piece that I want to share with you is  Bedtime Stories. It has the same feel of the weather and the season that we are experiencing her in Tennessee right now. It is named as it is because it has a mother with two cubs walking along a lake shore at night. In fact, he said this about the piece:

Over the centuries, story telling has been a vital source for connection of community throughout the world. Often the elders would pass on a pivotal event or interesting tale to the new generation. Then their memory could carry on the legacy or even the legends of the tribe/family. This form of communication is a type of glue that holds the family together when times are tough because “I belong” is stronger than fear. This act of telling inevitably knits the listener to the story teller as they laugh or even cry as the story is told. While we read books alone or even watch movies in a fantasy world of our own, this form of “retelling” is becoming a lost art form. So, next time you see the moon rising, take a little time and recall an event from your childhood or your parents life and pass it on to your children so they feel like they belong to something more than their soccer team or their school. Make your past interesting, embellish it a bit, and recapture the great moments and the legacy of telling Bedtime Stories. --Mark Keathley 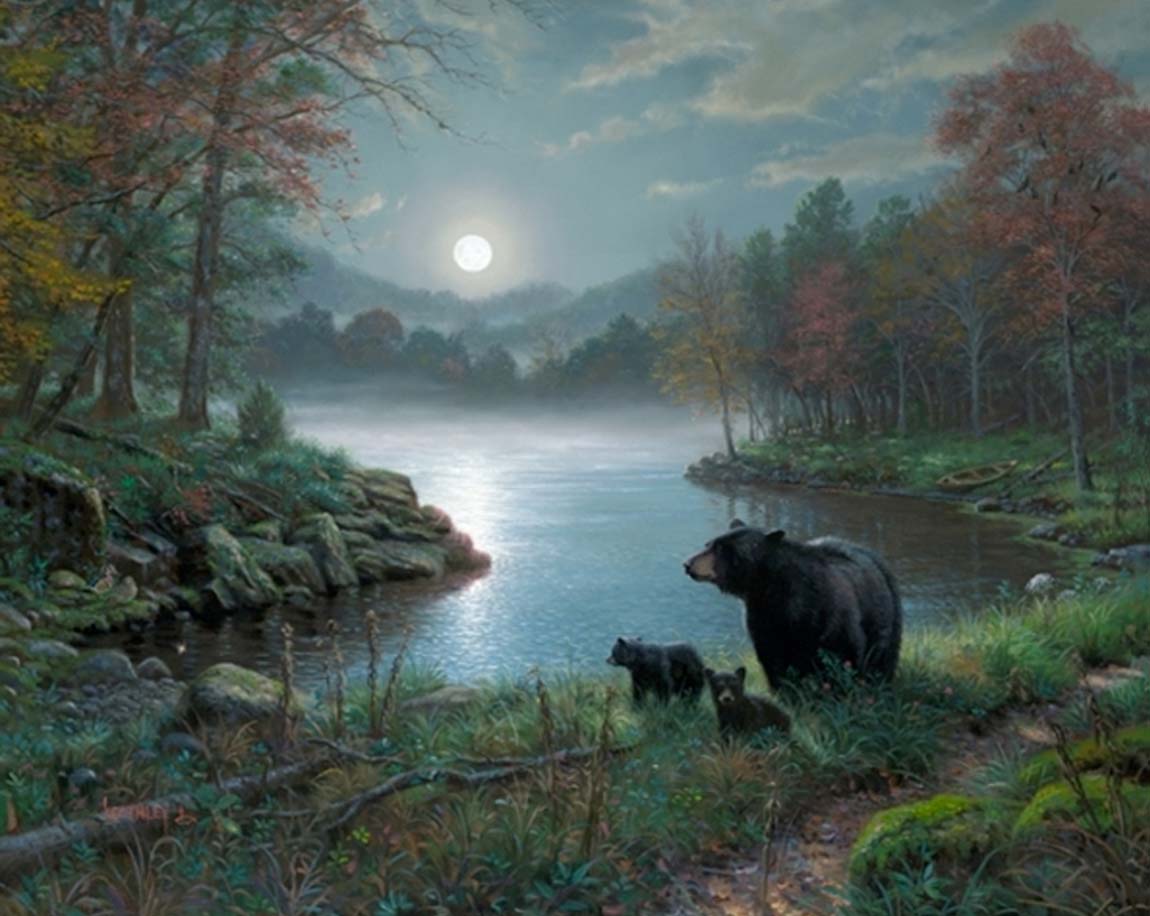 Now, let's dissect it to see what makes it so great...

1. One main light source... in this case, the moon. Using this technique, he can create more drama by where he chooses to put the light source and what it illuminates.

2. The S shape. If you look at the emptier space, the sky and the water, it makes kind of an S shape which makes it much more dynamic than if he would have had everything in a straight line.

3. The main subject (the bears) are slightly off center. He has actually placed the bears and the moon using the rule of thirds which can be achieved by placing a tic tac toe grid over an image. Where the lines intersect is where you put your focal points. By having more than one focal point and a way to connect them. he allows your eye to be drawn through the painting.

4. The colors. He has used a palette that works together. Even though he uses all three primary colors quite a bit, he does it in such a way that it doesn't create the uncomfortable tension that it could. Instead, they work together to create a very harmonious image.

So... these are some of the reasons that you could consider this a great painting. The biggest and best reason a painting is great, however, is because it resonates with something inside you; i.e. if you like it, it's great.

How to Make Art

I've never met an artist who started out making amazing pieces of artwork. It takes time and effort to develop your talent and voice (which can be as important as the talent). As an artist, you want to be saying something unique--something that excites you, consumes you, tells your story, or feeds your soul in some way. How do you get to that point? Practice. No, it's not the easiest thing in the world, but it works. Get a sketchbook, get several, use plain white paper, or scraps of napkin. Whatever you have available, use it. Practice, practice, practice. That's how you get better, and that's how you find what you want to say. Below, you can see a snippet of Abraham Hunter's journey as he continues to improve himself. 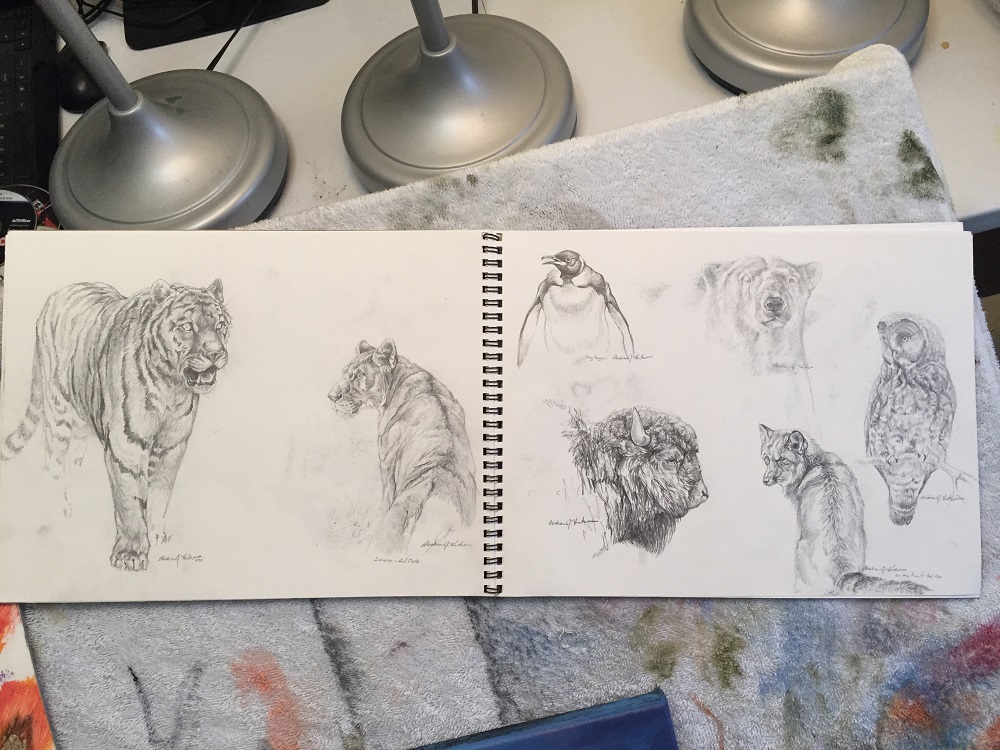 These two snuggly little guys look like they are having the sweetest of sweet dreams. This is Abraham Hunter's latest published piece, Sweet Dreams, and it makes you feel all warm and cozy inside just looking at it! Trivia... Foxes are found on every continent except Antarctica. Unless you are a scientist living in a REALLY cold climate, you have the possibility of encountering one of these cute little kits. These are red foxes, the most common type of foxes, but that doesn't make them any less cute! 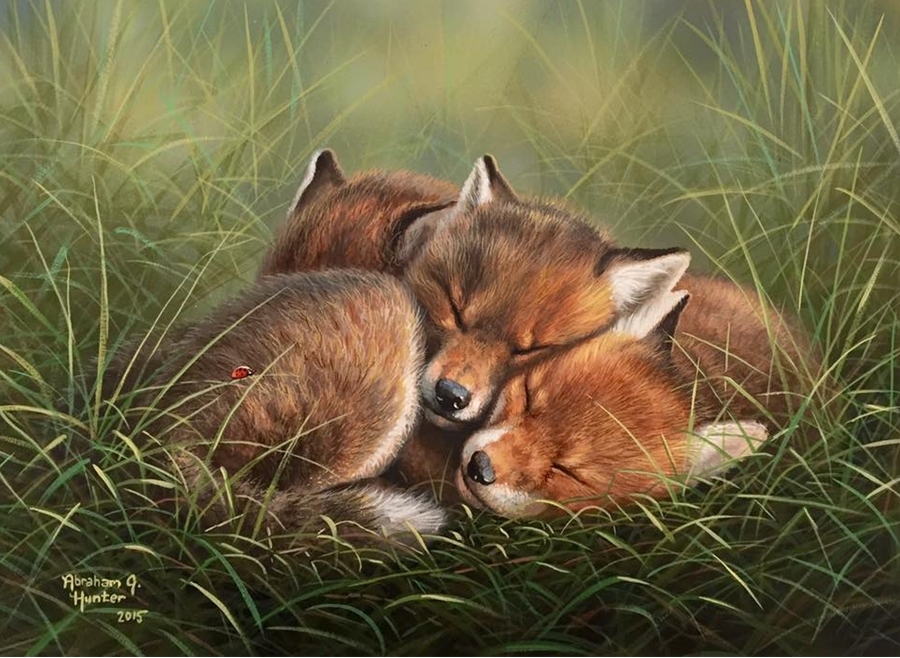